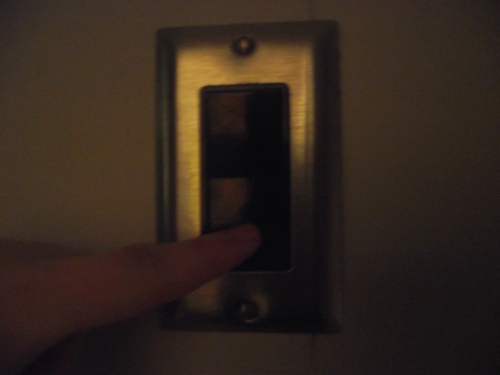 Turn off those lights! And any other power reliant things too for that matter!

In case you did not know, tomorrow (Saturday), at 830pm it is Earth Hour.  If you’ve never heard of Earth Hour before, it’s when we all turn off our lights to conserve energy.  Since I decided to write about it today, I figured I should find out a little bit more about it.

Earth Hour started in 2007 in Australia.  A whole 2.2 MILLION people, not to mention 2000 businesses in Australia turned off their lights for that one hour to show their support for stopping Global Warming.  Since then, the protest (I guess you can call it that!)  has grown to a world-wide event, with last year’s Earth Hour having 128 countries participate.  That kind of makes me feel all tingly inside. 🙂  This year, WWF (no, not the world wrestling federation- it’s the world wildlife fund) is actually asking people to for sure participate in the hour, BUT also try for longer.  If you can do the hour why not do more, is their logic.  I think it’s a faaaaaaantastic idea!

Last year I was unfortunately working at my job with a large drugstore chain.  And guess what?  No, we didn’t turn off all the lights, which then caused a fierce rioting mob of looters, but we did turn off all non-essential lights (about half to 3/4 of the main lights), as well as washroom, office, and staffroom lights.  If all those stores nationwide did the same thing, that alone is a heck of a lot of power conservation.  And that’s just one business!

Since Earth Hour is on a Saturday, the school board I work for decided that today we would participate in Earth Hour.  Yes, the classrooms were still pretty light, as it was during the day, but many classes were affected.  Not only did we just turn off the lights, but all classes turned off computers, smartboards, and any other technology being used.  To be honest, it really did affect our class.  We were scheduled to have gym.  Picture it.  The gym is in the middle of the school- no windows.  Did I let them run around screaming in the dark?  No.  We went back to the classroom and played desk volleyball in the darkened classroom.  They still had a blast.

My point?  An hour isn’t going to kill anyone, and it will make a difference.  Does it suck to lose your gym period?  Maybe, but we got over it.  Will it suck to not be able to go on Facebook or twitter for an hour?  Perhaps, but everything will still be there when it’s over.  Light some candles.  Have a romantic dinner.  Play a board game.  Read a book by flashlight.  There’s lots to do- especially when it comes to the environment.  Do your part! 🙂

Ok, I feel like this blog might be a little preachy.  Sorry guys.  It’s just so easy to participate!

Update me on how you spent your Earth Hour!

PS  My friend Sandra DID start her own “green” blog- It’s called “Save Money, Be Healthy, and Live Sustainably” and it’s great! Read it- you’d be silly not to!